VPN is one of the most used words in money saving LAN<->WAN Internet solution today.

The definition of a VPN is 'any network built upon a public network and partitioned for use by individual customers'. The Internet form of VPNs are networks constructed across shared IP backbones, referred to as 'IP VPNs'. 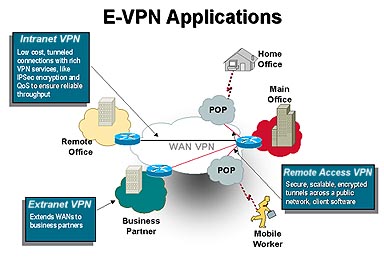 Each kind of VPN has it own challenges, and different ways in which it can be built. The topologies of the different VPNs are also dramatically different. Access VPNs, are classical hub and spoke topologies with all the remotes connecting into one or two central sites. Intranet VPNs range from hub and spoke to being a full mesh. The Extranet VPN topology is least understood topology, and for one corporation appears to be hub and spoke, but when viewed for several corporations will be a partial to full mesh of links. These are all virtual topologies, not real topologies, so the underlying premise is that you have ubiquitous any to any communication between endpoints, and then impose the structure required. 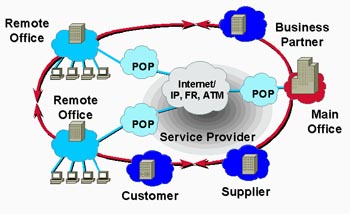 IP VPNs are not simply encrypted tunnels, but encompass an entire spectrum of technologies: